Julian Hook, one of the best athletes ever to come out of Robbinsdale High School, has passed away at the age of 80.

Hook was a 1959 graduate of Robbinsdale and a two-time undefeated state champion wrestler for the Robins.

He lettered in baseball three times and was all-conference and all-state in football and was part of the Robins’ mythical state championship football team in 1958.

Hook then played all three sports at the University of Minnesota and won a national championship in football, playing in two Rose Bowls, and was an all-Big Ten linebacker his senior year.

Hook was an attorney in the Twin Cities for decades and also served two terms in the state legislature. 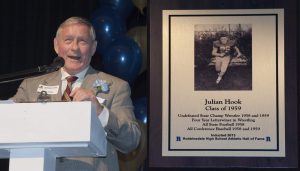