The Champlin Park boys soccer team is having a very strong season, and they will play for a section title.

In a game twice postponed by weather, the teams played on a slushy field at Maple Grove High School.

While Park Center had a strong first half with a strong wind at their backs, it was Champlin Park emerging with a 2-1 halftime lead.

Mr. Soccer finalist Will Heinen scored on a rebound of a Leo Conneh shot in the game’s fifth minute for Champlin Park.

Heinen scored again on a penalty kick after Conneh was tripped in the penalty area.

Park Center’s Kyle Wamstad answered with a free kick that fooled Rebels goalkeeper Logan Miller to bring the Pirates within 2-1.

Champlin Park controlled much of the second half, with Heinen netting his third goal of the night off a great feed from Conneh.

The Rebels will play Mounds View for the Section 5AA title Saturday afternoon at Mounds View.

Champlin Park would have been the host team as the higher seed but the Rebels’ grass field isn’t playable after the week’s snow. 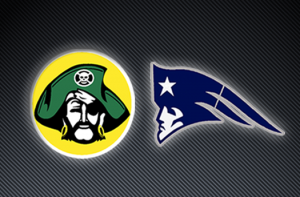