The Armstrong football team dominated Robbinsdale District 281 rival Cooper from the start on the way to a 63-7 win Saturday.

The Falcons took advantage of a Cooper fumble on the first play from scrimmage to score a quick touchdown 1:01 into the game on a Jamen Malone to Cade Berg pass.

After Reggie Carter’s short touchdown run made it 12-0, Isaiah Cotton provided the defensive highlight of the game.

Cotton jumped a short route and intercepted the Cooper pass, returning it 24 yards for a touchdown.

Carter and Berg each scored another touchdown in the first quarter as the Falcons built a 33-0 lead.

Berg had seven receptions for 84 yards and three touchdowns.

Quarterback Jamen Malone was 11-for-17 with four touchdown passes.

The win broke a seven-game losing streak for Armstrong in the series with Cooper.

It’s the Falcons’ first win over the Hawks since 2004.

Armstrong improved to 3-0 this season; Cooper fell to 0-3. 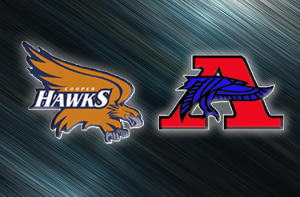