The Armstrong football team scored just before halftime Thursday to break a 7-7 tie as the Falcons went on to beat Irondale 27-13.

The Falcons scored first in a match-up of Suburban Blue District teams when Drew Kuempel recovered a fumble in the Knights’ endzone late in the first quarter.

Irondale tied the game in the second quarter on an 11-yard Nasir Hale.

Armstrong’s Jamen Malone then threw a four-yard touchdown pass to Marquan Tucker with 36 seconds left in the first half to give the Falcons the lead for good.

Tucker scored two more touchdowns in the third quarter- one on a lateral and the other on another short pass- to give him three TDs for the game and six already in just two games.

To watch the game in its entirety, click here 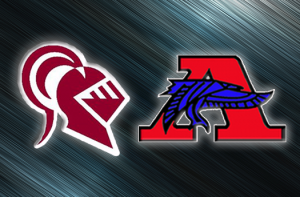