One person is dead and two others injured after a two-alarm fire at a Maple Grove business Tuesday night. Fire crews found the body of a woman just after 12 p.m. Wednesday at Hanson Implement & Storage. The woman had been missing since the fire broke out just after 6 p.m. Tuesday.

“We had initial reports of three people inside the building. When police and fire arrived on the scene, we had two people who had gotten out of the building,” said Maple Grove Fire Chief Tim Bush.

The identity of the woman found has not yet been confirmed. The Hennepin County Medical Examiner’s office will release more information soon. 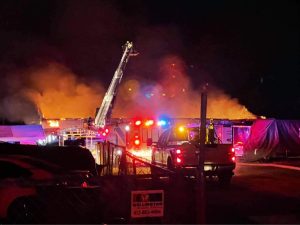 Thick heavy smoke and orange flames lit up the sky Tuesday night as fire crews extinguished the fire. The heavy smoke and flames made it nearly impossible to check for survivors during the night. The Maple Grove Fire Department brought in heavy equipment to search for the missing woman. Crews found her body after hours of searching.

The building has a large workshop, in addition to some office space and living quarters. Chemicals from the workshop accelerated the fire.

“There were some small bangs of possible propane cylinders,” said Bush.

The building is destroyed and there’s no word yet on what caused the fire.

This was the second fire fatality in Maple Grove this year.