On Monday, DFL challenger Bonnie Westlin conceded to Republican Senator Warren Limmer in District 34, but said she would run again in 2022. Unofficial results show only 900 votes separate the two candidates in the race to represent Rogers, Dayton, Maple Grove and Osseo.

Westlin announced the decision to concede in a press release, thanking her supporters and acknowledging that her votes came up short.

Over the past four years we have created a grassroots movement in this community to advocate for better
representation of our Minnesota values at the State Capitol. I am humbled by the amount of support we
have received, and while the election result did not go our way, we had a remarkable campaign that was
focused on people, not politics.

It is because of the hundreds of volunteers and thousands of donors that this was all possible. In the midst
of a pandemic, when we could not do the things we normally do, we created new templates for
campaigning, we reached thousands of voters and we shared our message of optimism and hard work. I
will always be extremely grateful for every single one of you who worked on this campaign. I still believe
that when good people come together with a common purpose, we can accomplish anything.

While our fight for this seat may be over in 2020, I want you to know that I am not done yet. After taking
a few days to weigh my options while the votes continued to be counted, I have decided that I will run
again in 2022.

This race is a rematch from 2016, when Limmer won with 60 percent of the vote. This year, he won with 50.74 percent. Limmer’s campaign said on Friday they were confident their lead would stand. 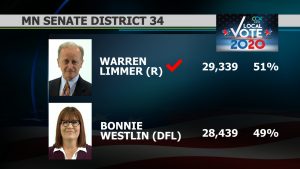 If you are wondering why 2022 when Senate terms last for four years, due to redistricting, all Minnesota legislative seats are going to be on the ballot again in 2022. The campaign confirms that Westlin says she will be running for the Minnesota State Senate again in 2022.