Wayzata Boys Track and Field Coach Aaron Berndt came up with a virtual decathlon to fill the spring sports void. Every school in Minnesota can participate in this contest that is all accessible online.

Wayzata boys track and field coach Aaron Berndt is just as disappointed as anyone that there’s a void in spring sports. But he has come up with a virtual decathlon to fill the void.

“Each school in Minnesota that wants to partake can,” Berndt said. “They just message the Wayzata Track and Field account and they receive an entry instruction for a google doc.”

How does it work? Berndt says teams take their school records and convert them into the points they would receive if the time and mark was in a decathlon. The google doc then adds up all their points and ranks them by which team has the most points.

There are 10 events in the decathlon. But one of them, the javelin, is not a Minnesota high school event. So, this decathlon actually only includes nine sports. 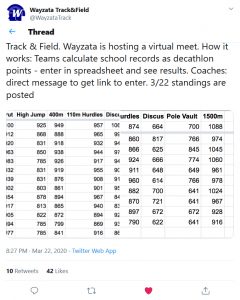 A Tweet from @WayzataTrack kicked off a virtual decathlon.

Berndt is pleased with the response from schools around Minnesota.

“At first, I sent it to the coaches in the Lake Conference and all seven schools have entered their results,” Berndt said. “Once I posted the results on twitter and told coaches from around the state they are invited to play along too, I received many requests. As of Tuesday, there are about 30 schools playing along.”

“The coaches who have the link can watch real time since it is on a google doc,” Berndt said. “I have been posting updates on Twitter (@WayzataTrack) the past couple of evening for everybody else to see.”

The idea is spreading too. The Trojans initial Twitter post had more than 13,000 online impressions. Coaches from Iowa, Michigan, North Dakota, South Dakota and Wisconsin have reached out to Berndt for more information on how it all works.

“For now it is just Minnesota schools,” Berndt said. “But maybe someday we will compete against other states too.”

This is Berndt’s 16th year coaching Wayzata’s boys track and field team and says it’s easily the most unique season of his coaching career. He can’t have individual contact with his athletes, so Berndt is using other ways to stay in touch.

“We have been communicating with the kids via google docs,” Berndt said. “We were able to get workouts out to kids before our last face to face practice. As long as they are healthy, they are encouraged to get in a workout. It can break up the monotony of their days. They are to do it alone, keep distance from each other. But in the event we can resume our season, hopefully they should be able to stay fit.”

But this isn’t the first time a catastrophic event has derailed a season for Berndt.

“I did share with my boys team, I lost most of one of my high school seasons due to the Grand Forks (ND) flood of 1997,” Berndt said. “Both myself and the head coach at Hopkins, Nick Lovas, were in high school together at Grand Forks/Red River.”

The school year came to an abrupt halt when the levees could not hold back the Red River flood waters.

“In that time, we tried to stay in shape the best we could,” Berndt said. “Even though school was called off the rest of the school year, we were able to salvage a short track season.”