As a football player, Jack Simon is no stranger to the weight room.

But earlier this year, the junior from Wayzata High School ventured into unfamiliar territory when he was diagnosed with stage 2, Hodgkin’s lymphoma.

“I was diagnosed on April 21, the day after I turned 16,” Simon said. “So I went through four months of treatment and then I got my scans done and I’m ultimately in remission right now.”

Throughout that entire ordeal, Simon kept working out and stayed focused on football.

His hard work kept him on the field.

“I kept playing all summer, even when it was hard,” he said.

On Oct. 7 when Wayzata played Maple Grove, Simon and his teammates raised money to support cancer research through the sale of T-shirts and bandanas.

While Wayzata ultimately lost that game, it was just one example of Simon supporting a cause that’s been near and dear to his heart.

“When I was diagnosed, I realized I could turn this really bad situation into something really special,” Simon said.

During Sunday’s game against the Chicago Bears, the Vikings honored Simon as their Hometown Hero. During a timeout, they played a video detailing his story. At the conclusion of the video, the Vikings had Simon, his family and his Wayzata teammates come onto the field.

The team then presented Simon with a special surprise. 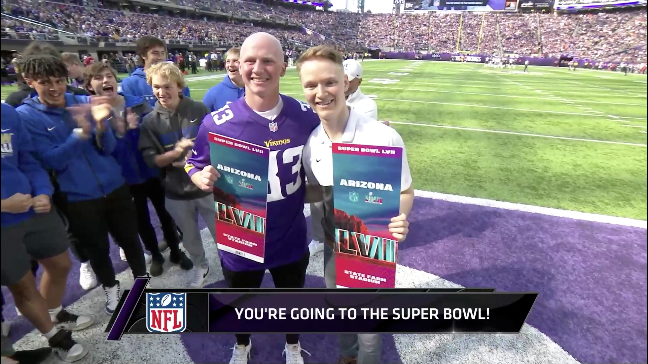 Wayzata junior Jack Simon (in purple) was presented with free tickets to the Super Bowl during the Vikings’ game against the Chicago Bears on Oct. 9.

Simon received two free tickets to Super Bowl 57 in Arizona as a way of saying thanks for his impact to the community.

Now, he just has to decide which of his parents to take to the big game.

“I told my parents, I said, whoever treats me the best in the next couple months, it’s theirs,” Simon said.