Kiersten Lawrance and Ellie Lawrance are sisters who are among the first group of girls in the state to achieve the Eagle Scout rank. Each completed an Eagle Scout project. Kiersten coordinated a blood drive and Ellie created birthing kits for mothers in Haiti. The sisters are students at Wayzata High School and members of scout Troop 283 in Hamel.

Kiersten Lawrance is a freshman at Wayzata High School. She says she wanted to achieve rank like her brother.

“When my sister said she was going to do it I was like, well I can’t be the only kid that doesn’t get Eagle,” said Ellie Lawrance, finishing up her junior year at Wayzata.   The girls are some of the first females to achieve the Eagle level in Scouts BSA, formerly Boy Scouts of America. And the first sisters to reach it at the same time. 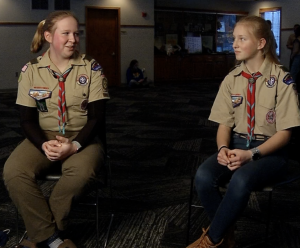 Ellie and Kiersten helped motivate each other to achieve Eagle Scout rank.

Whatever the motivation, the siblings who are not quite two years apart, achieved the goal in very noteworthy time.

“If you get all your milestones in and end it’s 18 months from start to finish. And I think they did it in somewhere around 20 to 22 months. So very fast,” said Travis Holland, Troop 283 Scout Master.

Each of the girls had to complete an Eagle Scout project.

Ellie Lawrance felt motivated to do something with Haiti.

“So I reached out to Healing Haiti, which is an organization that is actually based in Minnesota. And so they came up with this idea of creating birthing and layout kits for mothers and babies in Haiti,” said Ellie.

The sisters achievements are all the more impressive considering that their troop has only been around a couple of years. All their fellow troop members share the distinction of being founding members.

Scoutmaster Holland says the girls joined in February 2019, the date when girls were allowed to join Scouts BSA.

“They’ve absolutely put in a lot of work. You have to have 21 merit badges to get to Eagle and that all takes time,” said Holland.

Ellie would like to remain active in scouts and see her troop flourish.

“I’ve seen a lot of troops that haven’t’ like, they just don’t get many new recruits. And the older scouts just kinda drop out after they get their Eagle. I want to try to not be one of those scouts,” said Ellie.

An Eagle Scout can still earn palms representing numbers of merit badges above and beyond the 21 required for Eagle.

But, for right now, Kiersten would like to take in what she’s accomplished.