A water treatment technology company wants to build in Brooklyn Park. The city council approved a site plan for Kurita Water Industries to build near the Brooklyn Park Hy-Vee store. The 156,000-square-foot building would be on the northwest part of the land that’s between Highway 610, Zane Avenue, 93rd Avenue and Hampshire Avenue. 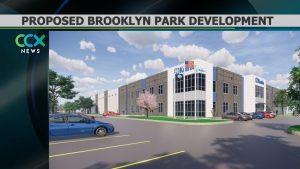 A rendering of the building that would house Kurita Water Industries in Brooklyn Park.

Kurita Water Industries is a global organization that specializes in the design, manufacturing and implementation of water treatment, including chemicals, equipment, facilities, testing and processes. The company acquired U.S. Water, which is headquartered in St. Michael. Kurita had also previously acquired other companies in the Twin Cities, like Plymouth-based Tonka Water.

The new property will allow Kurita to consolidate spaces and potentially grow. Kurita expects 190 jobs on day one, with the jobs being varied from warehouse and manufacturing to laboratory scientists and engineering.

“I’m glad they picked Brooklyn Park and I’m hoping I can welcome them to our city,” said council member Terry Parks.

The lone vote against the site plan review was council member Mark Mata, who expressed concern about the look of the building.

“I look for something a little better,” said Mata. “You are just off a major freeway and you are just a major wall. That’s not what I want to see facing 610.”

The proposal also includes the extension of 94th Avenue between Hampshire Avenue and Hy-Vee.

The Brooklyn Park City Council also approved a site plan review for an addition and parking lot expansion at Excell Academy, which is located on Zane Avenue. The city previously agreed to lease park land to the school instead of allowing the school to purchase the land.

Excell Academy is a charter school that continues to expand since first locating on 6510 Zane Avenue in 2002.