There are more than 47,000 registered voters in Brooklyn Park, but most of them stayed home during Tuesday’s special mayoral election. According to preliminary vote totals, candidate Lisa Jacobson topped Hollies Winston by a single vote. Winston has indicated there will be a recount.

City officials say there was only a 14 percent voter turnout.

“They could have been electioned out,” said Brooklyn Park City Clerk Devin Montero. “There’s so many elections that we’ve had already, you know. Of course, last year was very, very busy with the presidential election. But [voters] could be on vacation, things like that.”

Montero was hoping for a 20 percent voter turnout, but for a special election in the middle of summer, a turnout between 10 and 20 percent is typical. 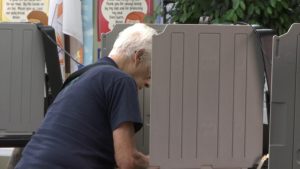 A voter casts her ballot at the Edge Christian Worship Center in Brooklyn Park.

How the Recount Process Works

There wasn’t much action Tuesday morning when CCX stopped by the Edge Christian Worship Center, which served as polling place. But with a recount on the horizon, there will be plenty of action at Brooklyn Park City Hall later this month.

“A typical recount, yes we do hand count each ballot,” Montero said. “We sort them for each candidate and then we count them, and compare those results with the results that came out.”

On Friday, Aug. 13, the Brooklyn Park City Council will canvass the results of the special election. The losing candidate then has seven days to ask for a recount, which must be received by 5 p.m. on Aug. 20. Within 24 hours after determining that a publicly-funded recount is requested, the city clerk in charge of the recount will send a notice to the candidates and to the Hennepin County Auditor. The notice will include the date, starting time, location of the recount and the name of the official performing the recount. The recount will be open to the public.