In one case, Glenn Smith, 59, of Brooklyn Park, was charged with second-degree murder in Saturday’s fatal Brooklyn Park shooting of 58-year-old Bobby Evans. The incident happened at a home in the 3800 block of 83rd Avenue North.

The criminal complaint says the two were childhood friends and both were drinking heavily for several hours before they started to argue. The argument turned physical, with Smith’s wife trying to intervene and pushing Evans to the door to exit the house, the complaint said. But Smith emerged from the bedroom with a gun and fired a single shot to Evans’ head. Evans was pronounced dead when police arrived.

According to the criminal complaint, Marable was a front-seat passenger riding with her boyfriend and Marable’s 2-year-old child in the backseat. The boyfriend had flagged down a Minneapolis squad car just after 8 p.m. on July 11 after the vehicle they were in was shot at numerous times, shattering a window and wounding Marable, the complaint said. The incident occurred at 26th and Emerson Avenues North in Minneapolis.

Police found Marable with a gunshot wound to her head and with no pulse. The child in the backseat was covered in blood and glass, and suffered cuts.

The driver told police he did not see who fired the shots. Investigators pulled surveillance video and were able to identify Manley in the vehicle where the shots came from. Manley had previous felony convictions and was not allowed to possess a firearm. 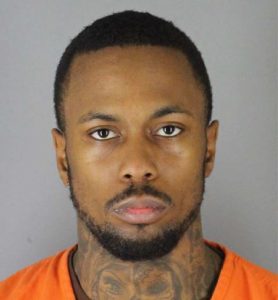 Investigators later learned that Marable’s boyfriend and Manley knew each other and had a verbal altercation over money about a year ago.

A search warrant of social media records found that Manley had been searching for Marable’s boyfriend 45 minutes prior to the shooting. A search of Manley’s residence also turned up a 9 mm handgun. Police found Manley on Jan. 8 and arrested him, the complaint said.