The Salvation Army in Brooklyn Park Ramps Up Food Distribution

The Salvation Army Noble Worship and Community Center in Brooklyn Park, is ramping up its food distribution program in response to the COVID-19 pandemic. They made changes to the “Cupboard of Hope” campaign about two months ago to address the community’s needs.

“We feel like we’re able to sustain these families through this time. Some of them have worked in restaurants, and they’re no longer working, so they don’t have income,” said Captain Josh Polanco of the Salvation Army. 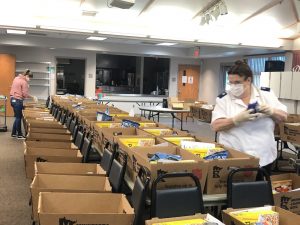 Polanco says around mid-March, Brooklyn Park officials asked the Salvation Army if they could increase their capacity to serve people who are dealing with food insecurity. The faith-based organization was previously serving about 10 families per week before the pandemic. Now, that number has jumped significantly.

“We committed to serve 100 families per week with emergency food boxes. Since then, we’ve served up to 150 families, and we continue to provide and have enough boxes to serve both our community through curbside pickups and those who can’t make it to our center through delivery with our partnership through Metro Mobility,” explained Polanco.

The Salvation Army added extra refrigerators and freezers. They also turned a classroom into a stockroom to store groceries. Each box of food is loaded up with staples like cereal, bread, canned foods, meats, and vegetables. The selection changes each week.

The food comes from rescued food and items donated by the church community. They also get food from Second Harvest, Kwik Trip, Aldi, Walmart, Papa John’s pizza, and Cub Foods.

Food Distribution Open to Anyone

Every Tuesday, the curbside food distribution is from 11 a.m. to noon, and the delivery service is on Fridays. It’s open to anyone, no questions asked. The Salvation Army also takes donations at the Brooklyn Park location off Noble Parkway, or you can donate online. The group is also in need of volunteers.