Nine miles from the courthouse where a jury convicted former Minneapolis police officer Derek Chauvin of murdering George Floyd, there was a sense of joy and relief over the fact that a white officer was going to prison for killing a Black man.

“I’m glad to hear that we have some guilty verdicts here,” said Amanda Norby-White, a teacher from Sage Academy in Brooklyn Park.

Norby-White was part of a group that gathered outside of the Brooklyn Center Police Department for a rally Tuesday afternoon.

“[The guilty verdict] was coming, and I think it was God’s will,” said Ann Brown, a resident of Minneapolis who felt compelled to come to Brooklyn Center. “Enough is enough. And I am so happy they found him guilty.”

Dozens gathered across the street from Brooklyn Center police headquarters on Tuesday for a previously planned demonstration involving teachers over the killing of Daunte Wright. 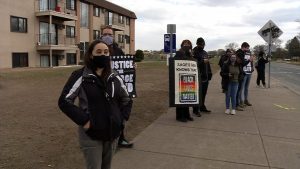 Amanda Norby-White of Sage Academy in Brooklyn Park was among the demonstrators who gathered in Brooklyn Center on Tuesday.

The demonstration coincided with the announcement of the Chauvin trial verdict. Many watched the scene play out on their phones as it happened.

“You know, we’ll take this minute and we’ll be thankful for it and we will keep working,” said Claire Winkels, a teacher from Venture Academy in Minneapolis.

They’ll keep working because relations between law enforcement and the Black community still have a long way to go.

The three other officers at the scene of George Floyd’s arrest will face trial on Aug. 23 on charges of aiding and abetting second-degree murder and manslaughter.