Tasty treats are easy to find in the Twin Cities. But there’s one particular dessert you’re not likely to see in most of your average bakeries: the French macaron.

“French macarons are unique,” she said. “Especially in the Minneapolis metro area. I don’t really know of many companies that only specialize in macarons.”

Seven years ago, Krumheuer rented kitchen space in a building along Highway 169 in Plymouth to make the decadent French pastry.

“I started kind of doing this on the side and it kept growing and growing,” Krumheuer said.

It grew so much that she was able to give up her job in corporate finance and purchase the building outright.

A year and a half ago, she put up a “Nikkolette’s Macarons” sign outside and added the retail component.

“They see the sign and kind of look me up on Google or whatever and come on in,” Krumheuer said.

What people find when they come in is more than a dozen flavors of the French macaron.

“A lot of people are like, well I don’t like macaroons. I don’t like coconut,” Krumheuer said. “And I always say, ‘you’re in luck, cause there’s no coconut in these. These are the French macaron.'”

It’s a dessert, she says, that’s still foreign to many Minnesotans.

“A French macaron should melt in your mouth,” Krumheuer said. “The shells are like a meringue, and then the fillings — I prefer to use fillings that are a dark chocolate or a white chocolate ganache, and then layered in with the flavors.” 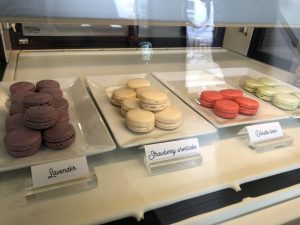 Nikkolette’s Macarons has more than a dozen flavors of the French pastry.

It’s a treat that’s perfect for wedding receptions, parties and big corporate events — most of which aren’t happening during the pandemic.

“So I no longer have people ordering 300 or 400 macarons for a large event, so it has kind of turned into a lot of little purchases,” she said.

Little purchases aided by the fact that they now ship nationwide.

“To get that in the mail is kind of special,” she said.

In addition to the macarons, Nikkolette’s Macarons retail store sells brands produced under the same roof such as “Here’s the Deal Spice,” “The Keto Scoop” ice cream and “Ink Sweets” cupcakes.

But the main draw is the flavorful pastry that’s less than two inches in diameter and sold in a building that serves as proof that a hobby can become a full-time job.