Robbinsdale police initially located Andren’s vehicle at a gas station on the 3600 block of Noble Ave. N. They determined Andren was the subject of a felony warrant out of South Dakota. Andren fled the gas station with officers in pursuit.

Police say after a brief chase, they used a PIT maneuver to get Andren’s vehicle to spin out. The vehicle was blocked in near the intersection of 38th and Noble Avenues and a white man, later identified as Andren, exited the driver-side door armed with a knife. Authorities say officers made commands for the suspect to drop the knife, but he failed to do so.  Police say an attempt using a Taser was unsuccessful and the suspect continued to charge them in an “aggressive manner.”

A Robbinsdale officer discharged his gun shooting the suspect. Officers attempted lifesaving measures after the shooting, but Andren died at the scene. A woman who was a passenger in the vehicle during the pursuit was uninjured.

The Minnesota Bureau of Criminal Apprehension, which is leading the investigation of the incident, identified the officers involved.

BCA crime scene personnel recovered a knife at the scene. The incident was also captured on body cameras and squad dash cameras, the BCA said.

The investigation is ongoing. When complete, the BCA will present its findings without recommendation to the Anoka County Attorney’s Office for review. 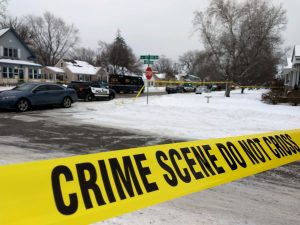