One month after George Floyd was killed by Minneapolis police, a large crowd gathered in Golden Valley on a pedestrian bridge overlooking Highway 55 to ensure that his death remains at the forefront of people’s minds. 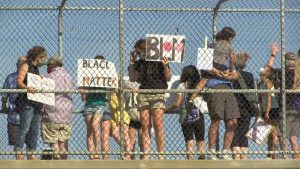 “Hopefully people can see that people are still protesting this and it’s not just going to go away until there’s real change,” said Charlotte Li, a 14-year-old from Golden Valley.

Li is one of the teenagers who organized this family-friendly protest. She’s part of a generation of young people who have decided to take on an activist role to fight for issues such as police brutality and institutionalized racism.

“After the George Floyd murder, I’ve never been more aware of it,” Li said.

“I want to take action,” said Ezra Hudson, 15, of Minneapolis. “We need to take action, especially as young people. We’re the next generation coming up.”

‘We need allies out here’ 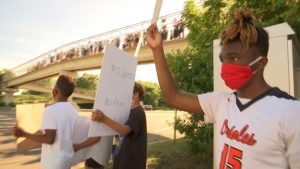 While Golden Valley is a predominantly white suburb, Hudson says the large turnout to Thursday’s event was an encouraging sign.

“There’s a lot of white people out here, and we need them,” Hudson said. “We need allies out here. It can’t just be us. Our voices need to be heard, but it needs to be a collective effort to get what we need.”

What they need, according to Hudson, is a world where they’re not afraid of the people who have sworn to protect them.

One protest on a Golden Valley highway won’t, in itself, create the change they seek. But what organizers hope is that their presence helps to initiate a conversation among those driving by — a conversation that, perhaps one day, leads to a more just society.

“We need everyone to come together to push the movement,” Hudson said.