Michael and Kristine Walker of Brooklyn Park are very familiar with Cup Foods in south Minneapolis. They grew up close to the store where a growing George Floyd memorial is located.

“I actually frequented that store as a teenager,” Michael said. “So I’ve been to that store plenty of times, been up and down that block.”

The intersection of 38th and Chicago is now sacred ground. The exact spot where Floyd died during an encounter with a Minneapolis police officer on Memorial Day has chalk art, flowers, graffiti, murals and signs that pay tribute to the 46-year-old.

On Sunday the Walkers brought their kids to south Minneapolis to see this up close.

“In the morning all four of us were down at 38th and Chicago to experience the pain, the grief, but also the unity,” Kristine said. “It was peaceful there. People were kind and people were talking.” 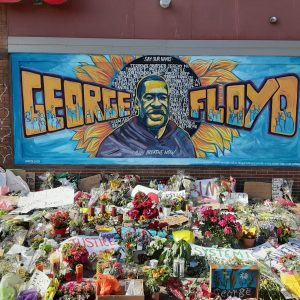 For Michael, seeing ground zero was powerful and also struck a personal chord. Many African-American males fear they could be the next George Floyd.

“As a black man I live with that reality every single day,” Michael Walker said.

Floyd’s death has put 38th and Chicago in the global spotlight. The Walkers hope he did not die in vain. They hope that this is a tipping point that fosters  systemic change.

“We do want to see all the officers charged because they all played a role in that process,” Michael said.

“We have a struggle and we need to continue to fight for what’s right,” Kristine said.

“We also got to just be really mindful that this is not just an isolated incident,” Michael said. ” All the frustration, all the anger, all the pain is coming up because of all the years of these types of incidents.”

The Walkers believe something good can come from the tragedy. But they know a lot of bridge building needs to be done.

“When a police officer gets behind me, yeah my heart beats a little bit differently,” Michael said, “even though I’ve got my license, my tabs, insured all those things.” 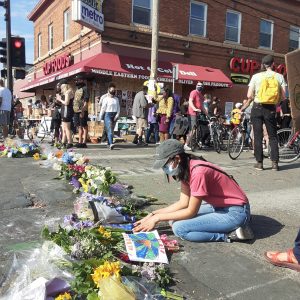 Besides going to the George Floyd memorial, Kristine was also on the I-35W bridge in Minneapolis when a semi-truck almost plowed through people marching. Fortunately Kristine escaped, but soon encountered another frightening site.

“Actually what was the scariest, is just as soon as we got down off the bridge, a ton of police officers were on the highway pointing there guns down at us,” Kristine said. “The peaceful protesters. That was hurtful.”