The Minnesota State Patrol honored a Good Samaritan with the Meritorious Citizenship Award.

Vincent Williams assisted at a Highway 252 arrest scene in Brooklyn Center back in Jan. 2021. Police say Williams witnessed a man assaulting a state trooper, pinning him to the ground, and then trying to get his gun. Williams physically restrained the man and got him to release the firearm.

“I think in our lives particularly right now, we have very few opportunities to stop and think about good things because our lives are about the crisis of the day or at the moment,” said Col. Matt Langer, Minnesota State Patrol. “I will tell you that we and that trooper are extremely thankful that he stopped, helped and didn’t hesitate and had a few choice words for an individual that was intent on either doing harm to the trooper or others that day.” 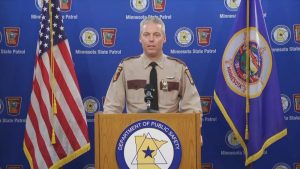