The last few months of Claire Wilson’s senior year at Wayzata High School have been anything but normal.

“I just keep telling myself that I can’t change it, so I’ve got to make the best of what we’ve got right now,” Wilson said.

Running is one of Wilson’s passions, and she was hoping to close out her final year of high school with a successful track season. Then, the COVID-19 pandemic hit and the Minnesota State High School League decided to cancel spring sports.

“You always look forward to your big last season, and we had been training really hard, looking forward to this,” Wilson said. “So it was definitely hard to see that we wouldn’t be racing again.” 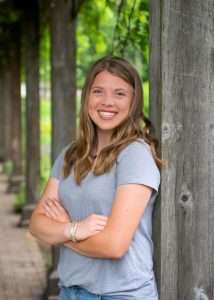 Track season wasn’t the only thing impacted by the coronavirus. Wilson and her teammates, Sammie Corning and Taya Vokaty, had planned a running clinic and children’s race at the end of March as part of their senior National Honor Society project. The goal was to raise money through that event and donate it to “Brave Like Gabe,” a cancer research organization.

But the coronavirus halted that project in its tracks.

“Pretty much all the seniors in NHS had to cancel their senior projects due to all the closures and the social distancing orders,” Wilson said.

However, instead of giving up, Wilson and her friends came up with an idea for a project that would not only benefit health care workers, but help out a small business in the process.

In late April, Rock Elm Tavern in Plymouth and Maple Grove launched a “Healthcare Worker Meal” program, where customers could purchase meals for the staff at Maple Grove Hospital for $7. 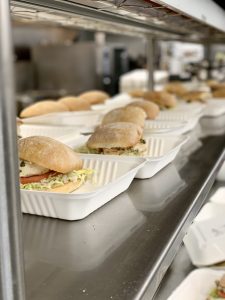 Some of the meals that Rock Elm Tavern provides to staff at Maple Grove Hospital.

Wilson and her friends all have close family members who work in health care, so when they heard about Rock Elm Tavern’s program, they decided to set up a GoFundMe page to raise money for the cause.

“We decided that we wanted to send meals to [the health care workers] to show our appreciation,” Wilson said. “And in the process, we thought we should definitely support a small business since they’re going through such a large economic toll right now due to all the closings of restaurants.”

After sharing the GoFundMe page on social media, Wilson and her friends raised $820 for the initiative. The donation came as a surprise to Rock Elm Tavern.

“Takeout from Rock Elm Tavern has been a weekly tradition for Wilson & her family, and we’re honored that she considered donating her funds to our Healthcare Worker Meal program which feeds workers at Maple Grove Hospital each week,” Rock Elm Tavern said in a statement. 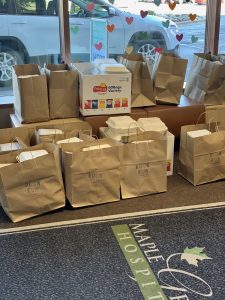 Rock Elm Tavern delivered 125 meals on May 19 thanks to the fundraising efforts of Claire Wilson and her friends.

“It’s just super heartwarming for me to just open up this fundraiser and see a bunch of people in my community donating to it,” Wilson said. “I just love to see that everyone is still looking to support these health care workers.”

Going Above and Beyond

While most people would have considered the fundraiser as a sufficient way to give back, Wilson didn’t want to stop there. She and her family purchased fabric and made masks for the workers at the Minneapolis VA Health Care System where Wilson’s uncle works.

“I know it’s been hard for [my uncle]. They’re definitely at risk,” Wlson said. “We’ve been making masks for his hospital because they were very low on supplies and stuff.”

Recently, Wilson and her family dropped off 200 masks to the VA. It’s a small token of her appreciation for those on the front line. 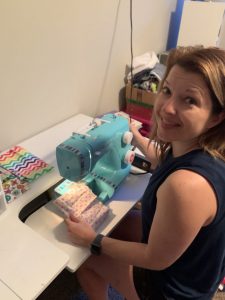 “While this pandemic can be super heart-wrenching and sad for a lot of people, it’s just great to see that there are so many people that are still looking to support all those people on the front line,” Wilson said.