Akiyah Ash is a senior at Armstrong High School and stands out for her positive attitude and perseverance in overcoming adversity.

Akiyah Ash is part of a unique program called the “A-school.”

“The A-School is an alternative program in Armstrong for students that are behind in credits or need a smaller learning environment to be successful,” says Brent Olson, director.

Since 1993,  the A-school program has helped juniors and seniors get on track to graduate. There are around 50 students in the program and some students, like Akiyah, flourish in part to the smaller class size and closer connection to teachers.

“She’s a great kid, just a really great kid,” said Olson. “She has had some obstacles outside of the classroom that has made it difficult in the past, but she’s flourishing up here.”

Akiyah lost her mother when she was six, and her brother and grandmother recently.

“I’ve struggled a lot in the past year,” said Akiyah.

Akiyah says A-school helped her find her place. Before, she was very shy. 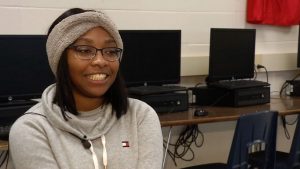 “We love Akiyah. The best way I can think to describe her is resilient,” said Shania Lane, an English teacher in the program. “I love to have her in class. She’s whip smart and gets the other students in line.”

Lane says if she puts a smart, but unfocused student near Akiyah, Akiyah will keep that student focused and on track. Lane also says Akiyah won’t let a setback stand in her way. Not too long ago, a younger sibling wrecked a school project. But, Akiyah rallied to re-do the project on deadline and earn a good grade too.

“She’ll figure it out and do it with a smile on her face,” said Lane.

“You just keep going,” said Akiyah, showing wisdom beyond her 17 years. “You can’t let obstacles stop you in life, gotta keep going around, and working your way around them.”

Akiyah is quick to focus on what’s important. Right now, that’s graduation….and prom. She’s still searching for the perfect prom dress, but when it comes to graduation, she points at a cap and gown on the wall of the A-school.

“I’m going to be in that gown one day. That’s going to be me,” said Akiyah. “I struggled through this year, but I’m proud to say I accomplished something that’s important to me.”

Akiyah’s dream is to one day launch her own brand of cosmetics and beauty products.