At Chick-fil-A in Brooklyn Park, Jill Ward mans the front register offering a friendly smile and a helping hand.

Ward moved to Minnesota from McDonough, Ga., to be with her grandkids. She applied when she saw the Chick-fil-A going up on Xenia Avenue.

She’s not the only one who departed the South to work at the Brooklyn Park restaurant. Operations manager Sarah Wayson moved to Minnesota from Valdosta, Ga., just north of the Florida border.

“The Luffmans have made it really easy, been like an extended family for me, made it always seem like I have somewhere to go, made sure I was taking care of,” said Wayson. “It’s made it a really easy transition.”

The Luffmans, Brandon and Rebecca, are the restaurant owners. The couple moved to the Twin Cities from Concord, N.C. They pursued a dream of owning their own Chick-fil-A franchise. Little did they know they would wind up in Minnesota.

“I served every level of the restaurant,” said Brandon Luffman, who has worked at a Chick-fil-A since he was 15.

Brandon’s wife, Rebecca, worked at a Chick-fil-A since she was 16. That high school job helped both of them land college scholarships through Chick-fil-A and then management opportunities with the company. They eventually learned about a franchise ownership opportunity in Minnesota.

“We booked a flight a couple weeks later and hopped on a plane, came here to spend some time all around Brooklyn Park, Blaine, Roseville, Bloomington, Mall of America, and really said, ‘we can see this.'” said Brandon. 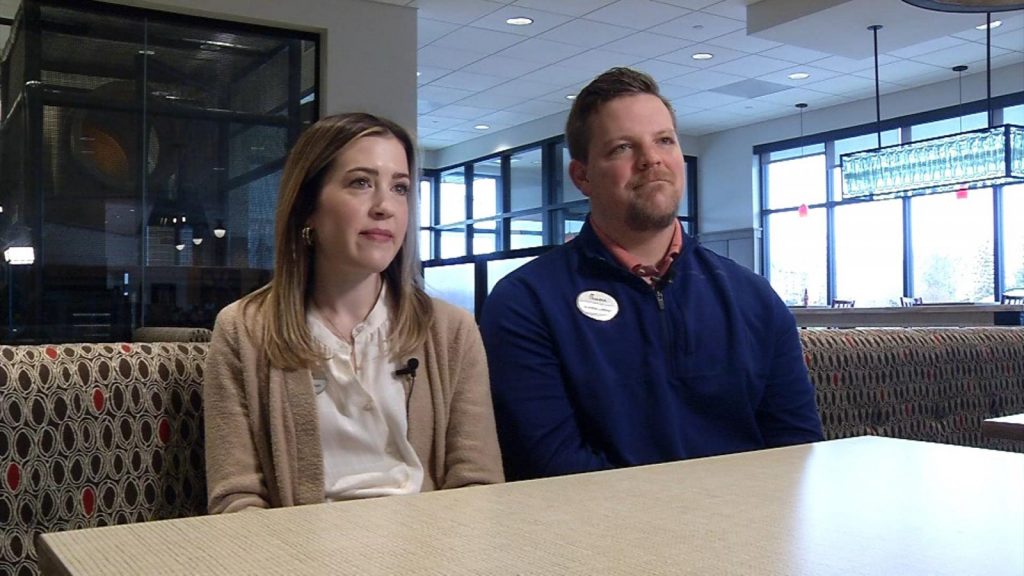 Rebecca and Brandon Luffman, owners of the Brooklyn Park Chick-fil-A

The Luffmans’ dream came to fruition on Feb. 20, 2020. That’s when a celebration took place for the opening of the Chick-fil-A restaurant in Brooklyn Park.

Then, just a few weeks later, that dream took a sudden turn with an executive order to close indoor dining.

“We just rolled with the punches, and just got really good at the drive-through experience,” said Rebecca Luffman.

The COVID-19 pandemic resulted in a lot of work and uncertainty. Brandon worked from open until close for several months straight.

“We knew to expect a bit of that to begin,” said Rebecca, referring to the long hours. “We just didn’t knew it would last that long.”

Fast forward a year and a half later, and the couple can finally focus on the community outreach they wanted to do with the restaurant.

“Our first full calendar year, we’ve made some really good relationships with local schools already. So we’re really just thankful for that and thankful for the opportunity to keep growing even,” said Rebecca.

The Luffmans say they are especially thankful for the Brooklyn Park restaurant’s 47 team members.

“Coming out of our first year, we still had 80 percent of our staff at year one were from grand opening,” said Brandon.

The owners managed to overcome a widely reported labor shortage, helped by a large number of high school students coming in to apply. They say the company works to attract employees by offering college scholarship opportunities and paths for advancement in leadership.

Jill Ward, the oldest member of the staff, says she’s thankful too.

“I’ve worked a lot of jobs, and I can tell you by far that Brandon and Rebecca are the best ones to work for,” said Ward. “It’s just a great team here and I love it.”