Chick-Fil-A opened north of Highway 610 in Brooklyn Park on Thursday morning. It is the latest fast casual restaurant to open in a growing  area. 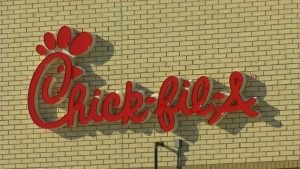 “I think it fills the opportunity to have a quick service restaurant that has a larger fan base,” said Brandon Luffman, the owner of this location.

Some people initially camped out overnight for free Chick-Fil-A chicken sandwiches for a year, but the campout ended early due to dangerous wind chills. Eligible participants still won prizes despite the weather. Others packed in early for a ceremonial grand opening.

“It’s really fun and it’s one of my favorite restaurants,” said an enthusiastic young Hannah Mayor. “The food is really good and I really like the biscuits and everything.”

Chick-Fil-A isn’t the first fast casual restaurant to open in the area. Panera Bread opened nearby about a month ago and Freddy’s Steakburgers opened a year ago next door.

For more on Brooklyn Park’s restaurant scene, check out this story.