After long lines for early voting, Secretary of State Steve Simon reported mid-morning that polling places have “good traffic flow” around the state. Simon also said there’s been no shortage of election judges, plenty of supplies or PPE, and no reports of notable conflicts. 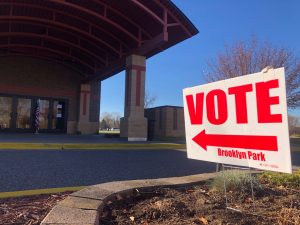 Early voting has been record-setting and numbers have been high in the northwest suburbs.  Some suburbs like Golden Valley and Plymouth reported more than 50 percent of registered voters had already voted by the Election Day.  The night before the election, Simon said ballots accepted so far was 1, 839,710, which represents 62 percent of all votes cast in 2016.

If you are in line when polling places close at 8 p.m., you will be able to vote.