A plane crash investigation got help from an unusual source. 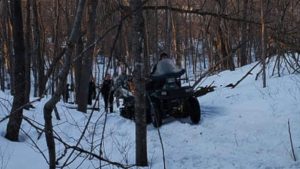 Crow-Hassan Park Reserve near Rogers has six miles of trails dedicated to snowmobiles. Randy Baudler of the Northwest Trails Association helps take care of those trails.

“I drive the groomer through here quite frequently, and we groom it probably twice a week,” Baudler said.

The “groomer” he’s referring to is a massive machine that’s stored in a shed near the Elm Creek Dog Park. The Northwest Trails Association, (of which Baudler serves as president), owns the groomer.

“It’s called the Tucker Sno-Cat,” Baudler said. “What it does is it pans the snow out, and then after it freezes, it becomes a nice hard surface for snowmobiles.”

The association uses the machine to groom 120 miles of snowmobile trails throughout northwest Hennepin County.

“We like to groom our trails at least twice a week,” Baudler said. “We’ll get through the whole system.”

However, on Feb. 22, the Hennepin County Sheriff’s Office asked him to bring the $250,000 piece of equipment to Crow-Hassan Park Reserve for a bigger project.

A single-engine plane crashed that morning in a wooded area near the Crow River. The location limited access to the crash site.

“The crash site was about a mile and a half back in the woods in this corner,” Baudler said, pointing to the trail near the main parking lot. “Police and fire had a difficult time on Saturday getting vehicles stuck on this road here.”

The next day, Baudler used the groomer for 14 hours to clear paths that allowed law enforcement and investigators to extract parts from the wreckage site.

“Our groomer was really the only thing that would work for that type of situation,” and Baudler said.

For all of Baudler’s hard work, Hennepin County Sheriff Dave Hutchinson awarded him with a certificate of recognition at the club’s board meeting earlier this month.

It was a small gesture for a big project in less-than-ideal conditions.

“It just happened to be that I was in the right place at the right time to help somebody out,” Baudler said.

The Hennepin County Medical Examiner identified the pilot killed in the crash as 60-year-old Scott Wagner. The National Transportation Safety Board is investigating what led to the plane crash.