It would be the franchise’s first location in the northwest suburbs. The Brooklyn Park Planning Commission reviewed a site plan for the Scooter’s Coffee proposal at its meeting Wednesday.

The footprint for Scooter’s Coffee locations is typically very small. The Brooklyn Park building would only be 670 square feet, city documents showed.

Scooter’s does not provide indoor access to customers or offer patio seating. The company says this helps with quality and speed.

“From the time that a customer pulls up to the order board, orders, picks up the order, pays and leaves, it’s under three minutes,” said Krisandra Lippert, development project manager for Scooter’s Coffee. “They are constantly striving to figure out better ways to do that.” 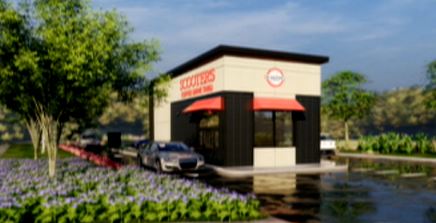 Scooter’s Coffee is rapidly growing with 139 new stores opening last year, officials said. The company has more than 350 stores nationwide, including several Minnesota locations, with stores in Litchfield, Maplewood, Rochester and St. Cloud. Others around Minnesota are either under construction or in a design phase.

The Brooklyn Planning Commission recommended approval. The city council has final say and is expected to vote on the proposal at its Oct. 24 meeting.

Also See: The Fox and Pantry Finds Niche in Plymouth with Artisan Coffee, Much More