Enduring chilly temperatures and sometimes standing for hours, the Salvation Army’s bell ringers have been a staple holiday tradition. But with COVID-19 raging and less foot traffic, red kettle donations are down.

“The need is great in our communities,” said Josh Polanco, the auxiliary captain of the Brooklyn Park Salvation Army. “Even though COVID is still going on now, we’re still out trying to do our Red Kettle Campaign.”

This year, the nonprofit is pushing for virtual donations as a contactless way for people to donate. 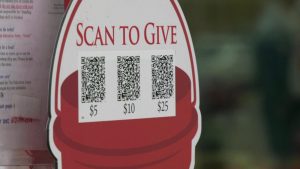 Still a long ways to go in the campaign, Polanco said there’s also a critical need for volunteers. He said there are still 11,000 hours of volunteer time.

“It’s actually a great and safe way to really make an impact this holiday season,” he added.

Polanco hopes that as people give thanks during the holidays that the red kettles are reminders to not forget about those struggling.

“Every time they see this red kettle that they realize the donations you’re making, it’s going to a good cause, it’s going to be sustaining families that are going through a tough time now,” said Polanco.