The new Rogers Tennis Club attracts people from throughout the northwest suburbs for indoor tennis and pickleball.

Four self-described tennis “fanatics” came together to open one of the only indoor facilities in the area.

“This area really did have nothing,” said co-owner Scott Larsen, who also coaches the Maple Grove Senior High tennis team. “The next closest facility to us is St. Cloud and they have four courts up there. Really, there’s nothing to access for indoor courts in this area and that’s why we looked at Rogers, Otsego areas.”

Larsen, along with Del Bauers, Randy Ronning, and Curt Johnson opened the seven-court Rogers Tennis Club about two months ago.  The owners didn’t hesitate to open during the pandemic, but recognized they had to increase safety precautions in order to build trust with the people coming to play.

“It has been one more hurdle in many hurdles along this five-year journey. We kind of laugh about it and say of course there would be a pandemic,” said Larsen. 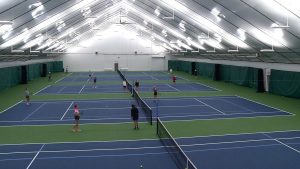 The Rogers Tennis Club opened about two months ago and features seven courts, two of which can also be pickleball courts.

The club has been busy since opening, and the demand for the two pickleball courts has even surprised owners.

“I did not understand how fast and how big it was. There are people calling from all over. There’s one group, they are booking permanent court time and they are coming from Mankato,” said Del Bauers, co-owner.

For people who love the sport and look for availability on courts during the winter months, they are happy to have an option closer to home.

Steve Boese from Elk River says he used to have to drive a good ways to play indoor tennis in the winter. “It’s very nice,” said Boese. “And having seven courts is nicer yet.”