Robbinsdale’s Pig Ate My Pizza to Relaunch as Brewpub

For the past eight and a half years, Pig Ate My Pizza has been a staple along West Broadway in Robbinsdale.

“This place is super, super cool,” said Chris Porter, a customer from Fridley.

“It’s served us and the community very well,” added Mike Brown, the co-owner of Pig Ate My Pizza.

But all good things must come to an end. As popular as the restaurant may be, it’s not immune to the challenges facing many businesses during the pandemic.

In other words, Brown and his team decided that it’s time to say goodbye to pizza.

“Having this pizza menu, we got to a point where it was too much,” said Nate Moser, the restaurant’s chef de cuisine. “We were too busy, it took a lot of labor to produce it.” 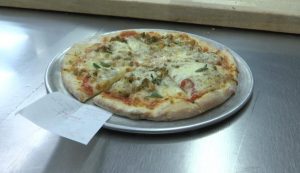 Pizza will no longer be a staple menu item at Nouvelle Brewing by Travail.

Come Jan. 1, 2022, Pig Ate My Pizza will become Nouvelle Brewing by Travail, where more of an emphasis will be put on the beer, which is brewed in-house by head brewer Andy Goettsch.

“For the longest time, people didn’t even know we made our own beer, and this will kind of bring the focus more towards the beer,” Goettsch said. “We’ll be able to kind of play around with the beer and the food.”

Yes, Nouvelle Brewing will still serve food. The menu just won’t include pizza, at least not on a consistent basis.

Think burgers or other large protein items, for example.

“If that’s what they think is best, it’ll be sad to have this vibe go away,” said Porter, the customer from Fridley. “But I’m sure it will still be awesome.”

The staff members hope others will feel the same way once the transformation takes place.

“We just want everybody to take a chance on us once again and come check out what we’re doing, cause we really are feeling the vibes of what’s happening here,” Brown said. “And we want you guys to feel it too.”

Meanwhile, Pig Ate My Pizza’s grand send-off will be in the form of a New Year’s Eve party.

Fans of the restaurant will have the opportunity to buy Pig Ate My Pizza merchandise and signage as keepsakes.