The program has two tracks, one that focuses on Native American culture and the other that focuses on Black culture. They are being offered at Meadow Lake Elementary, and more than 100 students have opted in to the program.

“My hope is scholars leave with a better sense of community, fellowship and social justice responsibilities,” said organizer Tamuriel Grace, director of integration, careers and colleges with the district. “Through the lens of the African-American culture or the American Indian culture, we hope they see their own selves.”

Students are called scholars and kick off every day with “Harambee,” which is a time of chants, songs and reading.

“It’s an opportunity to come together and get excited about the day before we embark on our learning,” said Grace. “We do what’s called ‘Harambee.’ It’s a Swahili word and it’s a fun opportunity for scholars to engage in some dancing and physical activity. They do cheers and chants.”

After the day kicks off with Harambee, students are divided up to work on reading or other academic skills. During Freedom Schools, there is a concentrated effort for the books that students read to reflect their heritage. For example, during one session a student read “Sulwe” by Lupita Nyong’o.

A cultural night for the community is also planned. 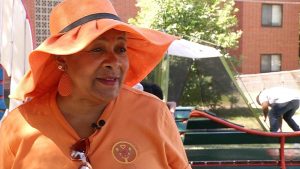