A police officer from Robbinsdale says this past Fourth of July had as many as five times as many fireworks calls as normal.

Sgt. Chis Woodhall has worked several Fourth of Julys in his 17 years.

“This Fourth of July I think was an anomaly,” said Woodhall. “It was five times the fireworks I’ve typically seen.”

Woodhall spoke to city council about fireworks calls during a recent meeting.

“It got to the point where Hennepin County dispatch wasn’t even dispatching officers to fireworks complaints,” said Woodhall, mentioning that dispatch would just put them in the computer without airing them.  “From 9 o’clock at night to 1 in the morning, we were literally running call to call with the fireworks complaints.”

City manager Marcia Glick says there have been a lot of questions about fireworks this year.

“Fireworks are a difficult thing to respond to,” said Glick.

Often, that is because the people who call 911 do not know precisely where illegal fireworks are coming from.

“We do appreciate people at least, as specific as they can be, if there’s a certain home shooting out fireworks every night, if we know that is going on, that will help us in trying to address some of the illegal fireworks,” she said.

Sgt. Chris Woodhall says the department has been short-staffed, but made sure they were fully staffed on the Fourth of July, with four patrol officers working. Chief Foley told the council that the department does see an increase in calls and they do have to be prioritized.

Woodhall says Robbinsdale’s volume wasn’t as much as north Minneapolis.

“Because we had so many this year, we made the decision to ask politely for people to shut them down,” said Woodhall, who mentioned they had six grass fires and two dumpster fires because of the fireworks.

Woodhall also mentioned a church that caught on fire in Crystal. He says officers would put out grass fires in people’s yards with fire extinguishers.

“It was truly a public safety issue,” said Woodhall. “We ran out of fire extinguishers.”

“The problem with trying to find someone shooting off illegal fireworks is it’s very difficult in a densely populated city,” said Woodhall.

It’s a misdemeanor citation for anyone shooting off illegal fireworks, maximum of $1,000 fine and/or 90 days in jail.

But for many people with pets or veterans with PTSD, shooting off fireworks is troubling.

“There’s a lot of people with post-traumatic stress disorder that really struggle on the Fourth and these holidays,” said George Selman, Robbinsdale council member. 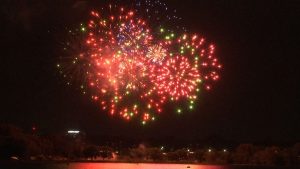