Robbinsdale Man Convicted of Driving Over, Killing Ex-Girlfriend on Sidewalk

A Robbinsdale man now awaits sentencing after a jury convicted him of running over and killing an ex-girlfriend with a vehicle. The Hennepin County Attorney’s Office announced the conviction Thursday.

Jordan Jefferson, 30, was found guilty of second-degree murder in the death of 28-year-old Ochea Brown. He was also convicted of two counts of felony domestic assault for assaulting not only Brown, but another woman he was having a relationship with.

On May 29, Minneapolis police responded to a crashed vehicle near the intersection of 17th Avenue North and Bryant Avenue North. They then discovered a woman dead in the back seat.

According to the criminal complaint, Jefferson intentionally struck brown on the sidewalk and continued to drag her under the vehicle until he struck a front porch. Another woman came to pick up Jefferson. The complaint says the Robbinsdale man punched her as well for “not driving fast enough away from the scene.” 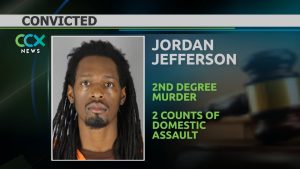 Jefferson will be sentenced March 3.