A Robbinsdale man is accused of shooting and killing his former girlfriend at her Crystal home. Nigar Mammadzada, 29, died of multiple gunshot wounds on Nov. 12.

Erik Eggleston, 38, of Robbinsdale is charged with second-degree murder. According to Hennepin County prosecutors, Eggleston used a shotgun to commit the crime. He’s scheduled to make his first court appearance Tuesday afternoon.

According to the criminal complaint, Mammadzada shared a child with Eggleston and had just dropped off the baby girl with a babysitter the morning of Nov. 12. She also dropped off her mother at her job before returning to her Crystal home in the 3500 block of Welcome Avenue. When her mother returned to Mammadzada’s home later that day, she found her daughter dead from what the Hennepin County Medical Examiner later determined was two shotgun wounds.

Later that night, Eggleston was taken a hospital in Coon Rapids for what authorities describe as an apparent suicide attempt. He had been bleeding from cuts, the complaint said.

Crystal police also obtained a search warrant for a vehicle parked in the driveway of a friend’s house where Eggleston was found bleeding. The vehicle was on loan to Mammadzada from a car dealership and inside it police found a shotgun and “what appeared to be blood on the barrel,” the complaint said. 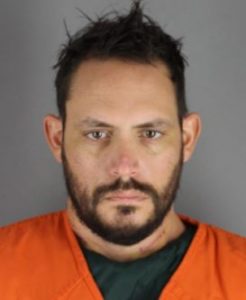 In a press release to CCX News, the Crystal Police Department thanked the officers and investigators for bringing the incident to a quick conclusion. Crystal police also encouraged those who may be a victim of domestic violence to reach out for help. They say call 911 or a domestic violence program, such as Cornerstone, “so that you do not suffer in silence,” the release said.