This week’s storm was indeed “the big one.” In fact, it turned out to be a record for a January snow event in the northwest suburbs.

When the snow stopped falling early Thursday, this week’s storm produced 14.8 inches of snow, as measured in New Hope and reported to the National Weather Service.

For Kamesha Davenport, that meant one busy week.

“Oh I think for a real strong woman, I got it,” she said. 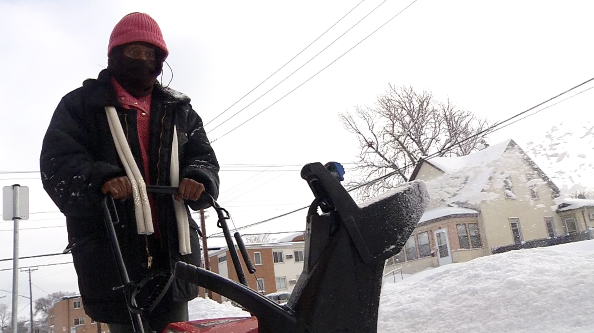 Kamesha Davenport uses her snowblower to clear a sidewalk in Minneapolis.

Davenport does snow removal in Brooklyn Center, Brooklyn Park and Minneapolis for her business, Pinky Fence. On Wednesday alone, she put in 14 difficult hours.

“The snow has been even taller than my snowblower,” she said. “So it has been difficult the last couple days.”

She’s not the only one putting in long hours this week.

In Golden Valley, a staff of 22 public works employees have worked 12-hour shifts to cover nearly 130 miles of residential streets and 53 miles of sidewalks.

“It’s just been long. You know, three days of plowing, pretty much non-stop,” said Tim Kieffer, Golden Valley’s public works director. “It was a tough storm just because of the duration, the amount of snow, the type of snow. It was wet, it was heavy.”

Public works crews came in at 2 a.m. on Thursday to help clear the roughly 13 inches of snow that fell in Golden Valley, stopping only occasionally to refill their tanks. 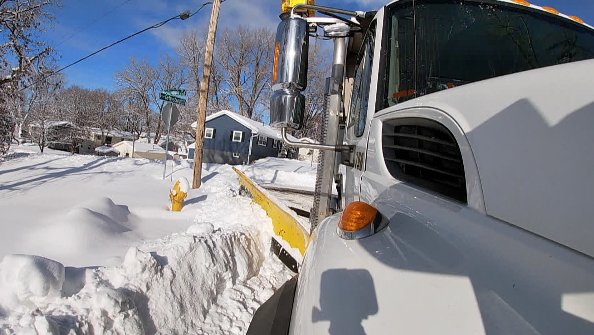 A plow truck in Golden Valley works on snow removal in a residential neighborhood.

“These trucks, everyone thinks they’re really easy to plow. But it’s slippery. They get stuck,” Kieffer said. “They don’t turn the greatest when it’s this type of snow.”

Yet, these unsung heroes plow through, overcoming the less-than-ideal conditions to help people get from point A to point B.

The crews don’t quite get down to the bare pavement – which is a policy on highways and county roads — but they get close.

“Cities typically don’t [get down to bare pavement], just cause of the amount of chemical that we’d have to use, and the resources it takes to get down to that,” Kieffer said. “So what we try to do is balance environmental impacts, cost of using chemical, and then just the drivability and trying to make the road as safe as possible.”

Back in Minneapolis, the one-woman crew of Kamesha Davenport takes a lot of pride in her work. It may not be easy, but the end result is rewarding.

“It may not seem like being stuck in snow is that big of a deal,” Davenport said. “But when you have things to do and places to go, and it may affect your work day or your situation with your kids, it’s great to have somebody with a snowblower who can come get you out.”

In total, 47 inches of snow have fallen so far this winter season. That’s more than all of last winter.