It was an unnerving situation for a Brooklyn Park neighborhood Thursday in which a man armed with guns broke into homes and held a 7-year-old boy hostage. Police say the incident was even more unusual because the crime appears to be completely random.

“It’s an absolute home invasion. There’s no relation between the suspect and the family,” said Brooklyn Park Deputy Police Chief Mark Bruley. “There was numerous children in the house ranging from 7 to 14 years old and the suspect had just broke into their door and they fled the home. Unfortunately that 7-year-old was unable to flee and had to retreat back to a closet in a bedroom, and the suspect located him in that closet and then took him hostage.”

The incident began around 3 p.m. Thursday when Brooklyn Park police received a call of a suspicious man walking through yards in the 7500 block of 83rd Avenue North.

Police say the suspect broke into one home that was occupied, then ran from the scene.

When officers arrived, they were flagged down by another family saying that the same man had broken into their home. Several children inside escaped, except for the 7-year-old boy. The suspect took the boy hostage and refused to surrender.

A SWAT and crisis negotiator team came in and eventually talked the suspect into releasing the child back to his family unharmed.

The standoff ended at around 10:30 p.m. when the suspect died from a self-inflicted gunshot wound.

“In this case he made it very clear from early on in the investigation that he was not going to go back to jail,” Bruley said. “He does have a history of being in prison. And at the end of the day, he had just elected to take his own life.” 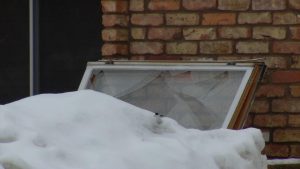 A broken window sits alongside Brooklyn Park home that was site of home invasion.

Police say the suspect came from Missouri in a stolen vehicle and had no ties to Minnesota. As of now, they don’t have any indication what he was doing in Brooklyn Park.

Investigators also believe he had an accomplice. They continue to look for that person and are working with authorities in Missouri to follow up on other crimes they may have committed.

Anyone with information on who this accomplice might be should call Brooklyn Park police.