According to the Minnesota Department of Education, public school enrollment dropped by 17,000 students in 2020-21 compared to the year prior. That’s a 2 percent drop.

The drop is more pronounced among younger students. Kindergarten enrollment saw a 9 percent drop statewide. Minnesota Department of Education officials say more families opted to delay starting kindergarten by a year or choose nonpublic school options during the pandemic. School districts in the northwest suburbs were not immune. Here’s a look at three of them: 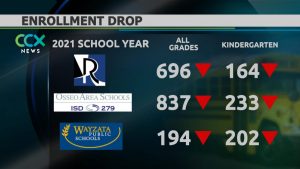 Funding Concerns for Next Year

There’s concern that the enrollment drop this year will lead to a funding crunch next fall because the state bases its funding on enrollment. On average, one student in Minnesota public schools generates roughly $10,164 in general education revenue.

“If we’re serious about making sure every child can pursue their dreams regardless of what they look like or where they are from, our leaders in the Legislature need to act quickly,” said Denise Specht, president of Education Minnesota, the state’s teachers union. “We can’t let a one-year dip in enrollment force budget cuts that will penalize the students who will return next year, especially when schools already needed more resources to help our students rebound academically and recover emotionally after this horrible pandemic year.”

Education Minnesota is calling on the state legislature to approve additional funding to compensate for students that parents held back or transferred out during the pandemic.

Gov. Tim Walz’s proposed education budget, called “Due North,” provides a one-time general fund increase of $25 million given to schools for the next two fiscal years.