We’re five months into a school year that’s thrown students and staff members at Jackson Middle School quite the curve.

“It’s unlike anything I’ve ever done before, in terms of education,” said Mike Bury, Jackson Middle School’s assistant principal.

Bury says they started the year doing distance learning, transitioned to the hybrid model, went back to online learning, then switched to hybrid once again.

Now, with a slew of safety measures in place, the hope is that they’ll soon be able to welcome back everyone to full, in-person classes.

“When kids walked into the building two weeks ago and then more this week, it was palpable how happy people were to see students again and start to have that impact on young people’s lives again,” Bury said.

But having kids back in person isn’t the only way staff members hope to impact the lives of their students.

Starting next year, the roughly 650 students entering sixth grade will have their own dedicated campus as a way to help them with the transition to middle school.

“They won’t necessarily be walking around the hallway with people that are twice their size and traveling a mile,” Bury said. “It’s almost literally a mile from one end down to the other end to take an art class or eat or go to phy ed. Everything is gonna be in a small campus.”

To help make this happen, construction is underway on a new addition to Champlin Brooklyn Park Academy, which is connected to Jackson Middle School.

Students in grades 3-5 will go into the new building, while the sixth graders will have a wing all to themselves. 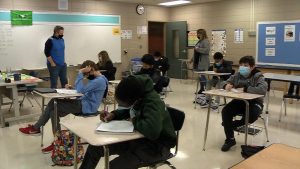 Sixth graders at Jackson Middle School will have their own dedicated campus in the ’21-’22 school year.

The initiative was made possible thanks to a referendum passed by voters in 2017 called “Fit for the Future.”

Now that vision is becoming a reality.

It’s a new chapter for Jackson Middle School that will hopefully be more normal than the year they just had.

“I think students will feel more welcome in the building and they’ll be excited to be part of our community and that will continue to carry over into seventh and eighth grade and across the street when they go to Champlin Park,” Bury said. “It’s just going to tighten our community.”