The trial of Kim Potter, the former Brooklyn Center officer charged with first- and second-degree manslaughter in the death of Daunte Wright during an April 11 traffic stop, got underway Wednesday.

Katie Bryant shared to the jury the day she learned her 20-year-old son was fatally shot.

Bryant said she was on the phone with her son using a Facebook app before her son had been shot by police.

“I heard the officer tell Daunte ‘No.’ And I heard Daunte say, ‘No I’m not.’ It sounded like he said ‘Don’t run.’ Daunte said, ‘No, I’m not.’ I heard somebody say to someone ‘hang up the phone.’ And that’s all I heard,” said Bryant, when she broke down on the stand.

The call was disconnected.

Wright’s girlfriend was in the passenger seat next to Daunte when she reconnected with his mother through Facetime. The passenger answered and she said “They shot him” and showed Bryant her son’s body in the vehicle with her phone.

Bryant called 911 to get the location of the shooting, which was near 63rd Avenue and Kathrene Drive. That’s where she said she saw her son’s body lying on the ground covered with a white sheet.

“I was so distraught. I didn’t know what was happening,” said Bryant. “I could tell it was him because it was his tennis shoes.”

Bryant said she gave her son $50 to get gas and a car wash the day her son was shot. It was revealed during testimony that her son did not have a driver’s license, nor insurance for the vehicle, which Bryant said was given to her son. She was not aware her son had an outstanding warrant for a weapons violation. 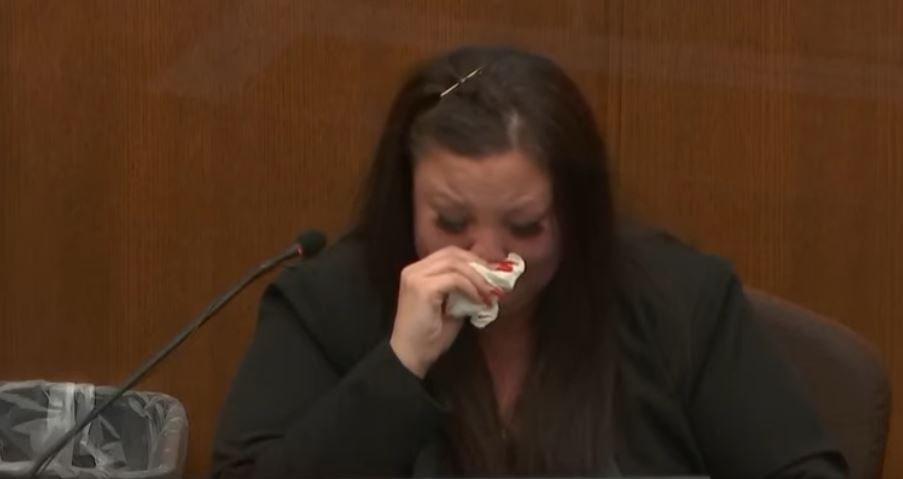 Katie Bryant, Daunte’s mother, tears up describing the moments when she learned that Daunte was shot by police.

Officer Anthony Luckey, 31, is the Brooklyn Center officer who tried to arrest Daunte Wright. He said his intuition kicked in when he saw saw a right blinker come on in a left turn lane near 63rd and Zane Avenue. Luckey, who was training under Potter, followed Wright and pulled him over for expired license plate tabs and air freshener dangling in the rearview mirror.

Luckey said Wright could not legally drive way because he did not have a license. The officer, who started with Brooklyn Center in February, also smelled marijuana and noticed evidence of marijuana on the console.

Luckey later testified on the moment he tried to arrest Daunte Wright, describing how the young man was tense and tried to resist.

“I basically just told him, ‘Don’t do it bro,'” said Luckey, a graduate of Park Center High School.

Luckey testified that he believed it was necessary to use a Taser on Wright because he was not in control of vehicle.

Luckey said he did not see any weapons in the vehicle. He witnessed Daunte Wright’s vehicle go airborne over a median and crash into another vehicle before coming to a rest at the corner of a residential yard. He was seen on video trying to comfort officer Potter, who had her face down in the grass sobbing. 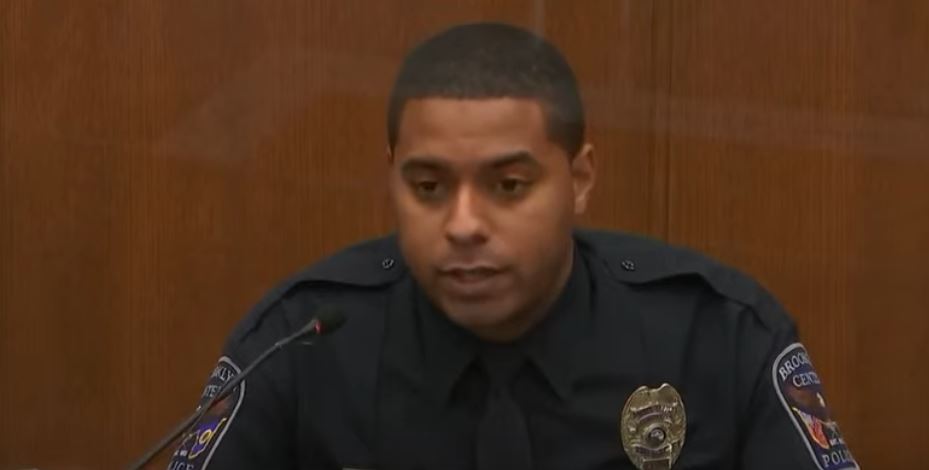 ‘I just shot him’

Minnesota Assistant Attorney General Erin Eldridge began opening statements in the case. Eldridge argued that Potter, a 26-year police veteran, should have known she was firing her 9mm Glock handgun instead of her Taser 7.

“We trust them to know wrong from right, and left from right. This case is about an officer who knew not to get it dead wrong. But she failed,” said Eldridge during her opening statement.

Per Potter’s training, the Glock in her duty belt is always on holstered on her dominant right side with the Taser positioned on her left.

Eldridge showed the difference between the Taser 7, which is plastic and part yellow in color, and Potter’s Glock. The prosecutor explained the Taser weighs 4.9 pounds and her Glock weighs 2.1 pounds when loaded.

The prosecution showed the bodycam video of Brooklyn Center police pulling over Wright, who prosecutors say was on his way with his girlfriend to get a car wash. Wright was stopped, according to court documents, for a dangling air freshener from the rearview mirror and expired license plate tabs. Prosecutors described it as a “run-of-the mill traffic stop.” During the stop, police learned Wright had an outstanding warrant for a gross misdemeanor weapons charge.

Potter was training officer Anthony Luckey at the time. Sgt. Mychal Johnson was also on the scene and positioned on the right side of Wright’s vehicle. Luckey, who is Black, tried to arrest Wright when the suspect broke free and tried to drive away. That’s when Potter stepped in yelled “Taser! Taser! Taser!” After firing the fatal shot, Potter could be heard screaming “I just shot him!” and “I grabbed the wrong f****** gun,” as well as “I’m going to go to prison” and “I just killed a boy.”

“As soon as she gets involved, she escalates the situation,” argued Eldridge. “Even the use of a Taser would be unwise in this case.”

The jury entered the courtroom at 10:09 a.m. Wednesday, though none could be seen on courtroom cameras. The 12-member jury took an oath to deliver a fair and impartial verdict.

The court was supposed to go into session at 9 a.m., but there was a 44-minute delay. The prosecution and defense attorneys then went over objections on certain exhibits.

One exhibit the defense wanted admitted was a photo of Wright holding a handgun in front of a mirror to push back at “spark of life testimony” expected to come from Wright’s mother and father, Katie and Arbuey Wright. Spark of life testimony is a limited type of evidence allowed in criminal trials in Minnesota meant to show that a crime victim was not a faceless person but was “imbued with the spark of life,” as the Minnesota Supreme Court explained in a 1985 ruling.

Hennepin County District Judge Regina Chu, who is presiding over the case, denied the defense’s request to introduce the photo.

Judge Chu told the jury that the defense is presumed innocent until proven guilty and must decide the case on the evidence.

“Reasonable doubt is a doubt based upon on reason and common sense. It does not mean a fanciful or capricious doubt, nor does it mean beyond all possibilities of doubt,” Chu told the jurors.

Only witness answers are evidence, not attorney questions, Chu explained. Jury members are not allowed to discuss the case with other jurors or anyone else during the trial. Jurors are also not allowed to listen to news reports on the case or do their own research.

The 12-member jury is comprised of six men and six women. Nine of the jurors are white, two are Asian and one is Black.