Jurors heard more than three hours of testimony Tuesday from the same Brooklyn Center police commander as prosecutors went over training and use-of-force protocols in the Kim Potter trial.

Potter, a former Brooklyn Center police officer, is charged with first- and second-degree manslaughter. She says she mistakenly used her firearm instead of her Taser. Prosecutors are trying to prove to the jury that Potter acted “recklessly” and was “negligent” during the April 11 traffic stop when she fatally shot Daunte Wright.

“It’s a difficult job at times, law enforcement, and we need to continue to strive to be our best,” said Brooklyn Center Police Cmdr. Garrett Flesland during the court testimony. “We don’t want to use unnecessary force.”

Flesland was called to the witness stand at about 9:20 a.m. and continued to provide testimony until roughly 12:40 p.m. when jurors could go to lunch. According to the two pool reporters inside the court room, at least one juror seemed to nod off.

The prosecution had Flesland explain department policies and walked jurors through the department’s manual on use of force.

“Use of force is significant,” said Flesland during questioning from prosecutor Matthew Frank. “It’s going to play into any ongoing relationship between the police and the government and the community.”

During the proceedings it was learned that Brooklyn Center uses Lexipol, a Frisco, Tex.-based company to help with department policies. According to Sgt. Michael Peterson, who testified Tuesday afternoon, Brooklyn Center has about six to 10 use-of-force instructors. Peterson is one of them.

According to Flesland’s testimony, officers are required to train with firearms annually and are evaluated. Prosecutor Frank then asked about policies ranging from vehicle pursuits to foot pursuits. During multiple questions, the defense objected arguing “irrelevance.”

The court testimony revealed that Potter got perfect scores on Taser training. Photos from previous traffic stops showed Potter always holstered her Taser on her left side, which was her non-dominant side. 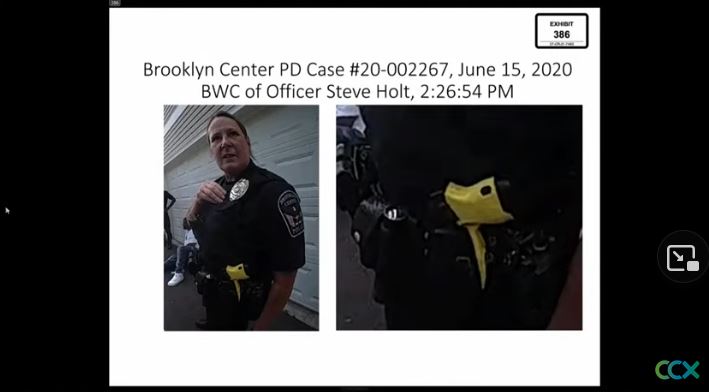 Photo seen during trial shows where Potter positions her Taser.

During cross-examination by the defense, attorney Earl Gray asked Flesland if Potter ever missed any training.

“I’m not aware of any,” said Flesland.

Gray then questioned how real-life scenarios compare to training.

Asked Gray, “And when you train as a police officer, no matter how much training you do, it’s not like real life, like in an emergency situation out on the street is it?”

Gray then dove into scenario questions with Flesland that resembled the events of April 11.

“If someone hypothetically is inside a vehicle that’s trying to take off, and part of his body is hanging out and part of it is in the car, and that car took off, that person would be dragged down the road, correct?” asked Gray.

Gray continued, “And that would cause great bodily harm, fair statement?”

“I would be concerned about that, yes.”

Asked if he believed policing was more dangerous now, Flesland answered in the affirmative.

“I see more guns more frequently now than in 2000,” said Flesland, referring to the year the police commander started.

The defense later asked a question that allowed Flesland to share his thoughts on Potter.

“She’s a good cop. She’s a good person. She’s a friend,” said Flesland. “I had no concerns going to calls with her.” 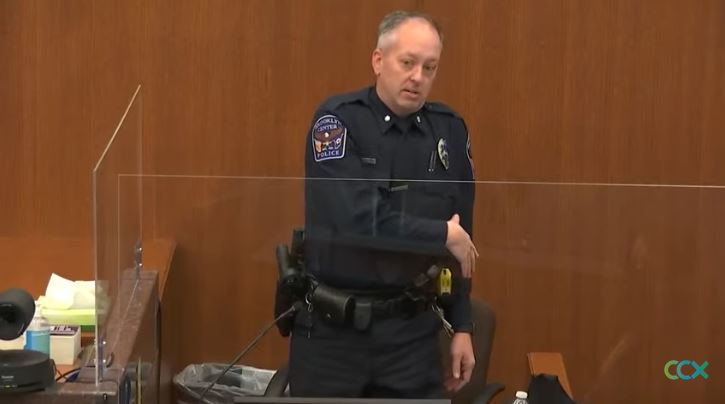 Flesland shows to the jury how he positions his Taser.

Defense to prosecution: ‘Now they want to redo the testimony’

Friday’s court testimony from former Brooklyn Center police Sgt. Mychal Johnson included a statement that Potter could legally use lethal force based on the circumstances, citing state statute. Johnson was on the passenger side of the vehicle as Daunte Wright resisted police and attempted to flee when Wright was shot.

Asked Gray on Friday, “If an officer in your position, officer Potter, trying to stop him from resisting with you and resisting Luckey, would it be fair for that officer to use a firearm to stop him?”

During a conference Tuesday morning before the jury was allowed to enter, prosecutors made a motion to prevent what they considered “improper lay opinion testimony.”

“In this case, what the defense has done, has asked Sgt. Johnson on Friday, and presumably will ask additional witnesses to assume and speculate what was in the mind and known to officer Potter, former officer Potter, at the time these decisions were made,” argued prosecutor Erin Eldridge before Hennepin County District Judge Regina Chu.