If the U.S. Supreme Court draft opinion that was leaked this week becomes official and throws out the Roe v. Wade abortion rights ruling, abortion would still remain legal in Minnesota. However, abortion would immediately become illegal in states like North Dakota and South Dakota.

Officials from Planned Parenthood say that clinics like the one in Brooklyn Park could then be inundated with patients who can’t get abortions in their home states.

They say that their clinics, like the Brooklyn Park Health Center, could see an increase of women seeking abortion services of between 10 and 25 percent.

That would be exacerbated by the fact that Planned Parenthood is suffering from the same worker shortages facing the health care industry.

“In the short term, as states see a surge, we may actually be at a point where we’re not going to be able to meet all the demand,” said Dr. Sarah Traxler, chief medical officer for Planned Parenthood North Central States. “But that will eventually work itself out as everyone sort of… it falls into place and we figure out where people are going to be traveling to.” 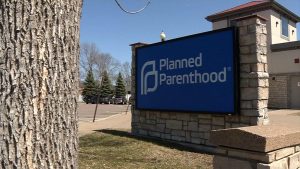 As for what’s next, Planned Parenthood said that all of their clinics will remain open until the Supreme Court ruling becomes official, which would likely happen in June or July.

In the meantime, Planned Parenthood will work on ways to raise funds and provide transportation to women in states like North Dakota and South Dakota who want to come to Minnesota for an abortion.