The case dates back to Feb. 7, 2018. Police responded to a home in the 9600 block of Trenton Lane North where there had been multiple 911 hangup calls. According to Maple Grove police, the man living there had a history of mental health problems. When police responded the man opened the door for them, but the man became agitated and retrieved a large knife from the kitchen. He then started to harm himself.

One officer, Dave Anton, deployed two Tasers to get him to drop the knife, but was unsuccessful. The man then began walking toward another officer with the knife. That officer, identified as Jeffrey Albers, fired his gun, injuring the man. A third officer fired another Taser, finally getting the man to drop the knife. Police Chief Eric Werner says the man told officers to kill him.

The man, who was 50 at the time, later admitted he was impaired by drugs. He recovered from his injuries. The incident didn’t result in charges against him. CCX News is not naming him because he has not been charged.

The decision not to prosecute angered Law Enforcement Labor Services, the union representing the Maple Grove officers. The union’s executive director, Sean Gormley, said in a statement to CCX News that “somebody needs to explain how a man holding a knife can threaten police officers without any legal repercussions.”

“Officer-involved shootings are not only tragic for the victim and heartbreaking for the victim’s family and loved ones, they are traumatic for law enforcement,” Gormley said. “Any officer whose life is in danger, who is forced to shoot another human being, will carry that around for the rest of his or her life—no matter the outcome.”

“Those officers are under intense scrutiny, and sometimes face criminal charges for their conduct. A man who threatens officers with a knife should face the same consequences,” he said. 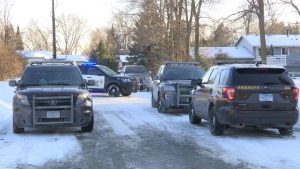 Werner said audio and video revealed repeated attempts by the officers to de-escalate the situation.

“All reasonable attempts at doing so were unsuccessful,” Werner said at the meeting. 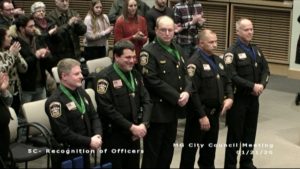 The Hennepin County Attorney’s Office released a response to CCX News saying after a thorough review of the case in 2018, prosecutors determined there was “insufficient evidence to file assault charges against the defendant.” The Hennepin County Attorney’s Office informed Maple Grove police of the decision. The Maple Grove department requested a second agency to review the case. That request was granted, the statement said.

The case was then sent to the Isanti County Attorney’s Office for review. That office came to the same conclusion as Hennepin County. Isanti County prosecutors notified Maple Grove police of its decision in August 2019.