Fire crews were called to the building on the 9300 block of Fernbrook Lane North shortly after 9 p.m. Tuesday. Investigators say the fire started at the back of the building and quickly spread to other areas causing significant damage.

Police on Wednesday released a photo of a vehicle caught on a surveillance camera just before the fire. The vehicle was a white Chevy Equinox with dark-colored rims and a black antenna on the roof. Police are asking residents to check their video doorbells and cameras between 8:30 p.m. and 9:30 p.m. Tuesday for images of this vehicle.

This latest fire happened not too far from the fire at Lynde Greenhouse and Nursery, which is also being investigated as an arson. At this time, investigators don’t think the two are connected.

“At this point we’re trying to pin down the point of origin,” said Maple Grove Fire Chief Tim Bush.

The historic building was most recently used by the city’s Parks and Recreation Department. Two members of the Maple Grove Historical Preservation Society met with the fire chief on Wednesday morning to see the damage firsthand.

“It’s not a good thing,” said Joyce Deane, a longtime Maple Grove resident and member of the group.

“I would hope that it can be recovered and rebuilt because it is part of our history,” said Al Madsen, president of the society.

The historic Maple Grove Village Hall was used as the primary office of the city from 1939 until 1975.

“The first village hall was destroyed in 1939 by a tornado, and this was the second one,” explained Madsen.

The building holds many memories for Deane.

“When my kids were little, we had our 4H meetings when it was no longer used as a meeting place for the city council,” Deane said.

“It’s terrible to lose. Hopefully, it can be fixed and is not a total loss,” said Madsen.

Anyone with information on the fire may contact Maple Grove police Detective Sam Valerius at 763-494-6237 or svalerius@maplegrovemn.gov. Those wishing to remain anonymous may contact Crime Stoppers of Minnesota at 1-800-222-8477 or online at www.crimestoppersmn.org. Information may also be provided to the Arson Hot-Line at 1-800-723-2020. 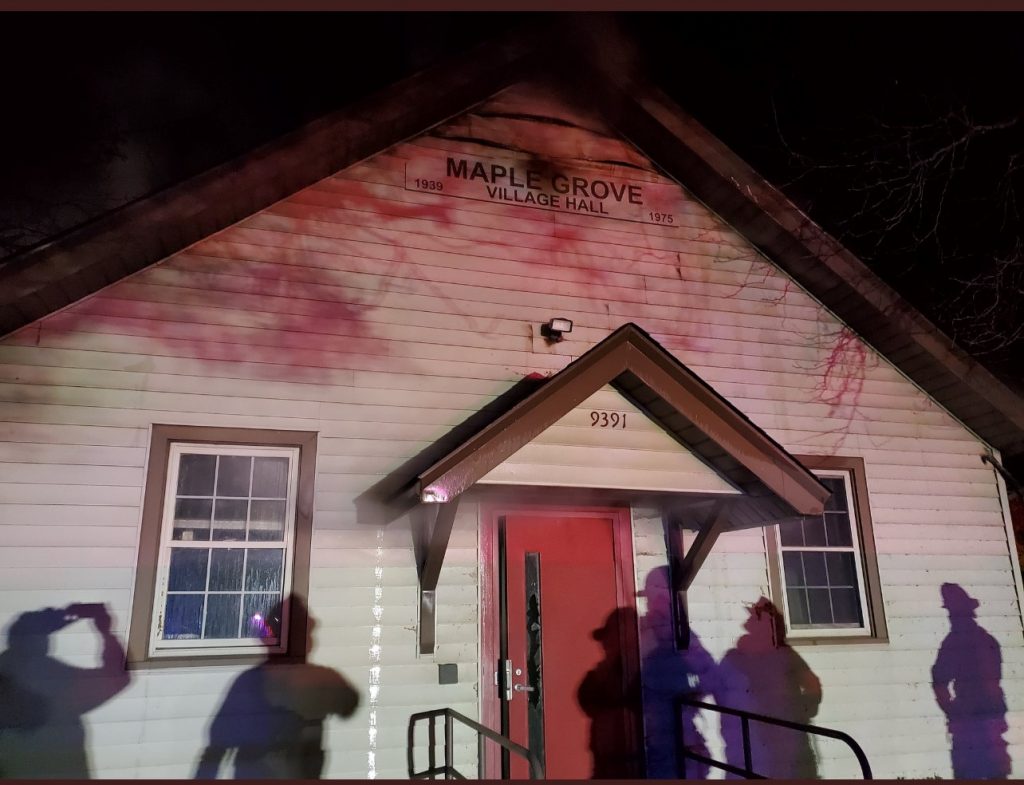