Police in Northwest Suburbs Crack Down on Street Racing

Brooklyn Park police teamed up with seven other law enforcement agencies to issue citations for people involved in street racing and stunt driving this past weekend. Police say it’s been a growing problem over the past few months.

“A lot of them are souped up cars that these people have a passion for and they’re street racing type vehicles,” explained Deputy Chief Mark Bruley. “They go out and the group meets together and they take part in reckless driving and stunt driving and that’s what’s really giving us a lot of concern. It’s the reckless behavior. Just because they’re endangering other people on the roadway and endangering each other. It needs to stop.” 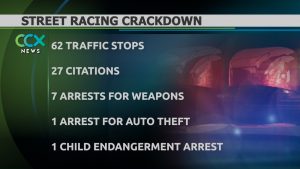 Brooklyn Park Deputy Chief Mark Bruley said he hopes the crackdown made a “loud and clear statement” that street racing is not tolerated.

“It’s no longer gonna be tolerated,” said Bruley. “If these groups want to come here into town and do this kind of stunt driving or hot rod racing, they’re going to be held accountable, and that will include citations, getting arrested and towing your car.”

Bruley also says a lot of street racers communicate with each other through social media, so police plan to monitor those channels until the reckless behavior comes to an end.