Many of us live busy lives where we’re constantly on the go. And sometimes cooking a delicious meal at home isn’t possible.

That’s where Ana Rayas and her husband, Luis, can help.

For the past 10 and a half years, they’ve provided the gift of convenience in the form of Mexican take-and-bake meals.

“This is authentic,” said Ana Rayas, owner of La Cocina de Ana. “You have the flavor, we don’t use cheesy sauces and God forbid, black olives.”

Each dish at La Cocina de Ana is inspired from the food the Rayases ate while growing up in central Mexico. 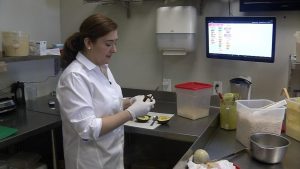 Ana Rayas hard at work peeling an avocado in the kitchen.

Customers just have to call ahead, or order online.

“So if you call us, then your food is ready in the refrigerator, to go,” she said. “And then just grab your order.”

When a new order comes in, Luis and Ana prepare the food fresh in the kitchen for people to pick up later that day.

“We get fresh veggies, we blend our own salsas, it’s not out of a can,” Rayas said. “All that makes a difference.”

Yet owning a restaurant was never a goal for this Plymouth couple.

A product of the Great Recession

Ana is a former mechanical engineer. Luis used to work as a food scientist at Cargill until he lost his job during the Great Recession.

Rather than uprooting their family, the couple opened La Cocina de Ana in a Plymouth strip mall along County Road 101 in 2010. Along the way, they racked up some notable recognition. 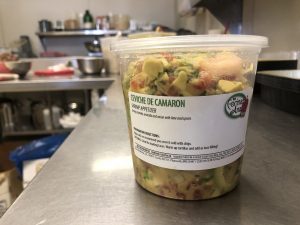 “The funniest one is, ‘The best food nobody knows about,'” Rayas said, reading a headline from Mpls.St. Paul Magazine.

More than 10 years later, word about their take-and-bake concoctions has spread throughout this area.

“It’s been growing and we want it to keep growing,” she said.

It helps that the business model was well-suited to overcome the pandemic restrictions facing traditional restaurants.

“There was no difference between a Monday and a Friday night,” Rayas said. “Like, all the days of the week were totally interchangeable.”

Now, even with the world returning to normal, they continue to bring a taste of central Mexico to the western suburbs.

“I truly love being here. It’s a great spot,” she said.

La Cocina de Ana opened a second location in St. Paul two years ago; in the near future, the owners are looking to expand to another part of Plymouth.