It started out as a joke for Khang Lu and his friends to build an exact replica of their college, the University of Minnesota.

Almost a year later, that joke turned into something extraordinary. 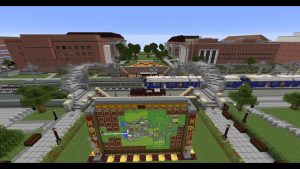 Lu and more than 40 others collaborated to create the U of M replica on a Minecraft server. The group calls the creation “Goldycraft.”

“We started fall of 2019. At first there was a huge influx of just building, building, building, so we got the majority of East Bank finished in the fall but a lot of us took a break because classes were getting a little harder as finals were coming up,” Lu said.

Anyone can help build “Goldycraft” as long as they’re students at U of M. To participate, sign into your UMN student account and go to this link to fill out a form.

“It’s a pick and choose your own building deal, some work on multiple buildings, others will work on one building. It’s really relaxed, people can choose what they want to build on,” explained Lu.

Lu said they had to jump through some challenges while creating the “Goldycraft” universe.

“A lot of scaling, a lot of photos, you can get Google satellite images but there’s a lot of buildings you can’t get all sides of it. A lot of looking up different images online,” Lu said.

To tour the work that Lu and his team have done, you can go on Minecraft Java Edition, Version 1.15. From there, go to servers and enter this IP: goldycraft.crafted.pro.