Plymouth police report a recent spike in catalytic converter thefts. Mechanic Jason DuBois from Stellar Autoworks in Plymouth says it’s common to fix cars that have had the converters stolen. Catalytic converters contain valuable metals like platinum, palladium and rhodium. A rise in metal prices has resulted in the increase in thefts.

DuBois can point out cars in his shop that are missing catalytic converters.

“This one’s been cut out and been replaced and it was stolen maybe two years ago probably,” said DuBois. “Catalytic converter helps break down the exhaust gases coming out from the motor to make it come out more eco-friendly into environment.”

DuBois says the long metal funnels can cost anywhere from $1,000 to $5,000 to replace. However, thieves can remove them in a matter of seconds.

“It takes all of 10 seconds maybe. You just need to underneath the car, cut through the pipe and you’re free,” explained DuBois. 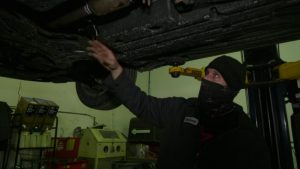 DuBois points out where the catalytic converter is located.

Jim Long with Plymouth Police says last week there were seven catalytic converter thefts and seven the week prior to that.

Catalytic converters also have components of platnium, palladium and rhodium which are valuable metals. Long says you can get up to $350 for one converter.

“They are getting higher prices for those particular metals,” said Long. “They go to scrap yards and scrap shops where they are getting cash for stolen converters.”

How do you know if you’ve had a catalytic converter stolen? Long says you’ll know immediately because when you start your car, there will be a loud roar.