Every structure is built to serve a purpose, and since 1976, Plymouth’s Fire Station II did its job.

But like with most buildings, there comes a time when changes need to be made to adapt to modern times.

“It’s really at the end of its useful life,” said Plymouth Deputy Fire Chief Dave Dreelan. “The stations were not built with any design features to basically have them occupied 24 hours a day, 365 days a year.”

“This small little space right here is the only space that we have to decontaminate anybody,” he said, pointing to a small room that looked like a storage closet. “You can see the emergency shower in there, the eye wash kit, right along next to everything we use to clean the trucks.”

The department also had to convert its training room into a dorm room to accommodate firefighters on the overnight shift.

“One of our firefighters sleeps in this space,” Dreelan said. “It’s not ideal.”

The city is in the process of developing plans to completely replace Fire Station II by building a new station and demolishing the existing structure.

Dreelan is one of the people overseeing that process. 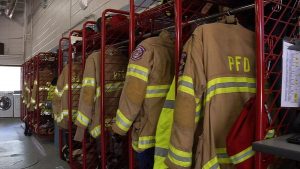 The plan is to design a station that would still have relevance for the next several decades. The new station would have everything from technology upgrades, an area for training, kitchen upgrades, and a dedicated space for firefighters to put on their gear.

“We have to continue to just go through this design process where we literally have to account and plan for every conceivable thing,” Dreelan said.

In addition to the complete replacement of Fire Station II, the city would also completely remodel Fire Station III and add about 6,000 square feet to the building to accommodate the department’s 24/7 staffing model.

The hope is to begin construction in the spring of 2021.