Dozens of sign-waving suburbanites gathered in Central Park in Brooklyn Park on Thursday. The group made up mostly of Park Center High School students and alumni chanted the name of George Floyd,  the black man who died while being arrestd by a white Minneapolis police officer. Floyd’s death sparked numerous protests around the city, including marches in Maple Grove and Plymouth.

The crowd marched and chanted their way to the Brooklyn Park community activity center. They took a knee and held a moment of silence to remember black people who have been killed by white police officers. 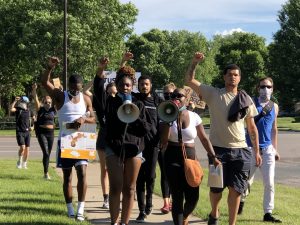 Students and alumni from Park Center called for justice in the George Floyd case.

“I simply couldn’t sit back knowing such a heinous act took place in Minneapolis, a city where I often find myself,” said one of the speakers.

The demonstrators called for an end to racial injustices in education and the criminal justice system. 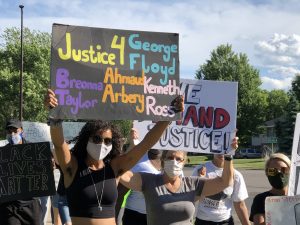 “I’m a teacher because I want students to feel affirmed when they walk into my classroom and see somebody who looks like me. I don’t always think that’s the case as far as teachers go,” said Park Center High School Teacher Lakita Davis.

Organizers say this is not the time for people in the suburbs to stay silent. ” Now the world is watching us, so what are we going to do? That’s right, pull up. Pull up for your people, represent,” shouted one of the speakers.

The group says this isn’t just a black issue, but it’s a human rights issue. They called on everyone to work together to make the world a better place for everyone.