It’s a chant that has reverberated throughout the world over the past week and a half.

It was uttered again Wednesday evening in honor of the man who died while being detained by Minneapolis police on Memorial Day. Yet unlike many similar events, this one didn’t take place on a city street in an urban environment, but rather in a park in the western suburb of Plymouth.

“I’m a little overwhelmed,” said Jessica Campos, when asked about the turnout. 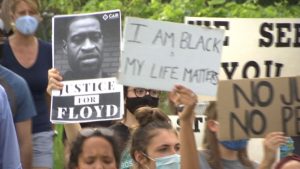 Campos organized this walk for George Floyd, in large part, so that children like her 4-year-old daughter could better understand what’s happening.

“When my daughter first asked why people were fighting, we told her it was because somebody died,” Campos said. “And when she asked what happened, we just had to be honest, and we said there was a police officer that killed a black man. And we asked her if she knew what being black meant.”

It’s a conversation many of the parents gathered in Plymouth Wednesday night likely never expected to have with their kids at such a young age. But the peaceful march was one way to make sure that the next generation understands the sometimes complicated dynamic between people of color and law enforcement.

“We don’t want to give the message that all police are bad people,” Campos said. “We want our children to be able to depend on the police if they ever have a situation that they need help with, so we don’t want them to be scared. However, we do want them to know that bad things happen and that race is a part of it.”

About 200 people took part in the march around Plymouth Creek Park, which is roughly 18 miles away from the site of George Floyd’s fatal encounter in Minneapolis.

“When you have a community that’s predominantly white, it is very important to still have these conversations and to have these types of demonstrations, simply because that just lets us know that the conversation is being held,” said Justin Lewis, a minister and motivational speaker who came from Champlin to take part in this event.

Following the march, Lewis said a few words to the crowd to encourage them to keep the conversation going in the days and months to come.

“That shows the world, and this community, that we do have advocates that do not look like us,” he said.