More than 25 miles away from the site of George Floyd’s fatal encounter with Minneapolis police, students showed up by the hundreds to Maple Grove’s Rice Lake Elementary School.

“This event is kind of just to bring everyone together and show that the black community has Maple Grove’s support,” said Chris Owusu, a senior at Maple Grove Senior High.

Maple Grove Senior High’s racial equity group, R.E.A.L. Talk, organized Monday’s March as a way to take a stand against racial injustice. Katya Cuthbert, a University of Minnesota student from Maple Grove, wanted to do her part to help.

“Maple Grove is actually 85 percent white,” Cuthbert said. “And being a white woman, I have a lot of white privilege, and even if it’s something you’re not conscious of, it’s our part to learn about it and learn how to help, and learn how to stand up for my friends who are of color.”

It’s a message she hopes people in the city hear loud and clear.

Blocking traffic to get their message across 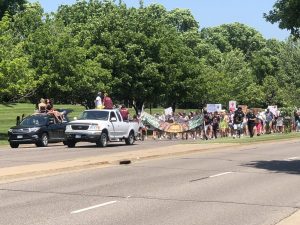 Local youth took to the streets of Maple Grove Monday afternoon in honor of George Floyd.

To get the word out, this youth-led march blocked traffic along busy streets, echoing a scene that’s played out throughout Minneapolis and other major cities around the world over the past two weeks.

“I think oftentimes we say the children are the future, but they are the present,” said Sharla Foster, an adult helping with the event. “They see what’s happening right now. They have voices that we need to be listening to. We’re expecting them to be the ones to take care of my generation.”

On Monday, those voices made the case that, although Maple Grove is far from the epicenter of the civil unrest, residents shouldn’t sit silent.

“Silence is part of the problem,” said Owusu, the Maple Grove senior. “I want the white community to feel comfortable to speak up, and not feel like what they’re saying isn’t authentic.”

After making a one-and-a-half mile, peaceful march through the streets of Maple Grove, it all ended at the town green for an afternoon of art, poetry and songs.